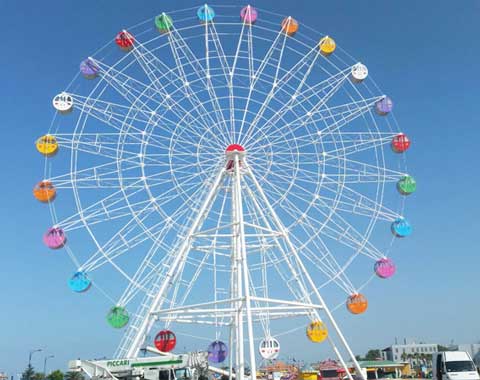 “Ferris wheel” is named after a person’s name—George Washington Gale Ferris Jr. Ferris designed and built the first Ferris wheel in the world in 19 century, and the original Ferris wheel is also referred to as Chicago Wheel. Ferris graduated from Rensselaer Polytechnic Institute and a Pittsburgh, Pennsylvania. He began his career in the railroad, and then became a bridge-builder. He understood the growing need for structural steel and founded a firm that tested and inspected metals for railroads and bridge builders. The origin of Ferris wheel starts from him.

Chicago Wheel has a height of 80.4 meters (about 264ft) and is opened to the public as the tallest attraction at the World’s Columbian Exposition in Chicago, Illinois on June 21, 1893.
The original wheel was made of an axle that was 45.5-foot high and weighted 71 tons, the largest hollow forging at that time and two cast-iron spiders with a diameter of 4.9m and weight of 53,031 pounds. In addition, the wheel consisted of 36 cars. Each is fitted with 40 revolving chairs and can load 60 people, so its total capacity reached 2160. According to the history, the wheel carried about 38,000 passengers per day and took 20 minutes to complete 2 revolutions. The first revolution involved 6 stops to allow passengers to exit and enter while the second one spent nine minutes and didn’t stop.

After the exhibition was over in October 1893, Chicago Wheel closed in April 1894, and was dismantled and stored until the next year. Then it was rebuilt and operated on Chicago’s North Side from 1895 to 1903. In 1903, it was dismantled again and was transported to St. Louis for the 1904 World’s Fair. Finally, it was destroyed on May 11, 1906. That’s the story about the origin of Ferris wheel.

Beston is a company that designs and manufactures all kinds of amusement rides which including kiddie rides, thrill rides, indoor rides, rides for carnival, amusement park, theme parks, coin operated rides, trackless trains, bumper cars, ferris wheel rides, pirate ship rides, miami rides, big pendulum rides  disco rides, and many of our products are exported to foreign countries all over the world. Welcome to buy the best amusement rides for your amusement business from Beston Group.